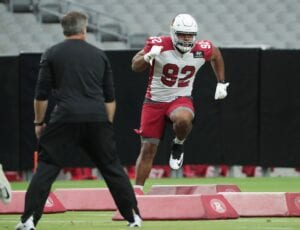 This opens a three-week window of time for the Cardinals to activate him from injured reserve and add him to their 53-man roster.

Lawrence, 23, was selected with the No. 131 overall pick in the fourth round of this year’s draft by the Cardinals. He agreed to a four-year rookie contract with Arizona.

In 2021, Rashard Lawrence has appeared in six games for the Cardinals, making five starts and recording 13 tackles and no sacks.