The Arizona Cardinals brought in six free agents for tryouts/visits on Monday including CB Bashaud Breeland, according to Aaron Wilson.

Breeland was waived last week after he got into a verbal altercation at practice with coaches, took off his cleats, and sparred with multiple teammates who were trying to calm the situation. 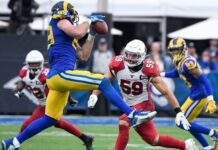