McAdoo, 41, previously served as the Packers’ QBs coach before he was hired as the Giants’ offensive coordinator back in 2014 and eventually took over for HC Tom Coughlin two years later.

The Giants fired McAdoo towards the end of the 2017 regular season.

During his two years in charge of the team, McAdoo led them to a record of 13-15 (46.4 percent), which includes a playoff appearance last year. 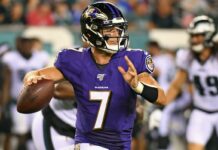