The Arizona Cardinals announced Friday that they’ve placed OL Justin Murray on injured reserve with a back injury. 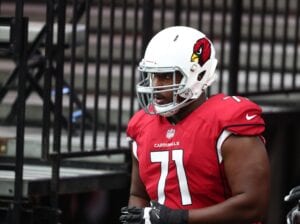 Murray will now miss at least the next three games before he can return to the team.

Murray, 28, wound up signing gon with the Broncos as an undrafted free agent back in 2016. He lasted just over a year in Denver before he was signed to the Buccaneers’ practice squad.

Murray had brief stints with the Saints and Bengals before the Raiders claimed him off waivers at the start of the 2018 season. He was later claimed by the Cardinals and returned to Arizona on a two-year extension worth up to $9 million last year.

In 2021, Murray has been active for three games, making one start for the Cardinals.