According to Bob McManaman, the Cardinals have re-signed LB Joe Walker to the practice squad and released LB Tahir Whitehead from the unit. 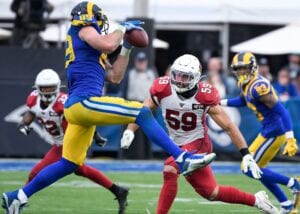 Philadelphia re-signed Walker to their practice squad after he cleared waivers. He had a brief stint with the Cardinals before joining the 49ers and then Washington.

In 2021, Walker appeared in 12 games for the Cardinals and recorded 11 tackles.