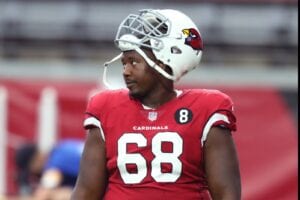 Beachum, 31, is a former seventh-round pick of the Steelers back in 2012. He played four years for the Steelers before signing a one-year, $4.5 million contract with the Jaguars in 2016.

The Jaguars declined their two-year option on Beachum after one season. From there, Beachum signed a three-year, $24 million deal with the Jets in 2017 and played out that contract.

The Cardinals signed Beachum to a one-year deal last year.

In 2020, Beachum appeared in all 16 games for the Cardinals, making 16 starts for them at right tackle.