According to Adam Schefter, the Cardinals are releasing veteran LB Jordan Hicks. 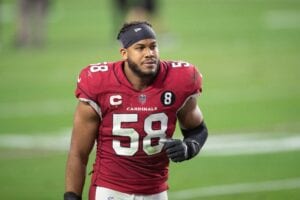 This move comes as expected, as Arizona has drafted linebackers in the first round in consecutive drafts and saves a chunk of cap space by moving on from Hicks.

The team gave him permission to seek a trade last offseason but he ended up staying and beating out the younger competition to retain his starting job.

According to Over The Cap, releasing Hicks creates $6.5 million in cap savings for the Cardinals and $3 million in dead money.

Hicks, 29, is a former third-round pick of the Eagles back in 2015. He played out the final year of his four-year, $2,992,732 contract and was testing the open market when he agreed to a four-year deal worth $36 million contract that included $20 million guaranteed with Arizona back in 2019.

Arizona negotiated a pay cut with Hicks that lowered his base salaries for the 2021 and 2022 seasons.

In 2021, Hicks appeared in all 17 games for the Cardinals and recorded 116 total tackles, seven tackles for loss, four sacks, one forced fumble, two recoveries and five passes defended. Pro Football Focus had him rated as the No. 30 linebacker out of 87 qualifying players.