According to Gilbert Manzano, the Chargers activated LB Asmar Bilal from their injured reserve and promoted LB Cole Christiansen and DT Breiden Fehoko from the practice squad to their active roster. 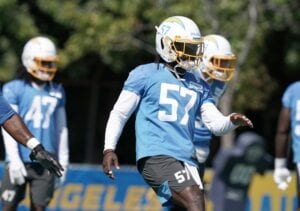 Bilal, 23, signed on with the Chargers as an undrafted free agent out of Notre Dame back in April. He was among their final roster cuts coming out of training camp and re-signed to Los Angeles’ practice squad.

The Chargers promoted Bilal to the active roster back in September.

In 2020, Bilal has appeared in one game but did not record any statistics.