Herbie Teope reports that the Chiefs are signing fullback Michael Burton to a one-year deal on Thursday. 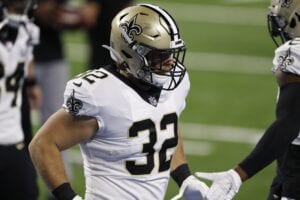 Long-time Chiefs FB Anthony Sherman opted to retire a few weeks ago, so Burton will get an opportunity to replace him in Kansas City.

The Lions waived Burton in 2017, after which he was claimed by the Bears and finished out the remainder of his rookie deal. He had a brief stint with the Saints before signing on with Washington in 2019.

From there, Burton returned to the Saints last year on a one-year contract.

In 2020, Burton appeared in 15 games for the Saints and rushed for 18 yards on seven carries (1.2 YPC) to go along with four receptions for 28 yards receiving and no touchdowns.