According to Matt Derrick, the Chiefs have tendered an offer to exclusive rights free agent TE Nick Keizer. 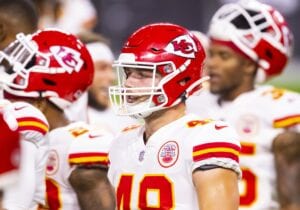 Keizer is a mainstay as a backup tight end and on special teams for Kansas City.

Keizer, 25, wound up signing on with the Ravens as an undrafted free agent out of Grand Valley State back in 2018. He agreed to a three-year, $1.71 million contract with the Ravens, but was waived coming out of the preseason.

Baltimore re-signed him to a futures deal for the 2019 season but cut him loose that May. He landed with the Chiefs after a tryout.

In 2020, Keizer appeared in all 16 games for the Chiefs and caught six passes for 63 yards.