According to Aaron Wilson, the Colts waived TE Andrew Vollert from their injured reserve with an injury settlement. 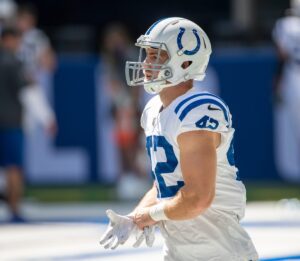 Vollert, 25, wound up going undrafted out of Weber State back in 2018. He signed a three-year, $1.71 million contract with the Cardinals, but was on and off of their practice squad before catching on with the Bengals last November.

Cincinnati brought Vollert back on a futures contract in January of last year only to waive a few months later. The Chargers quickly claimed him off of waivers from the Bengals but was waived with an injury designation and reverted to their injured reserve.

Los Angeles cut him loose in August of last year and briefly caught on with the Panthers. Indianapolis claimed him off of waivers but later was waived with an injury settlement. He returned on a one-year deal this offseason but was among their final roster cuts.

During his college career at Weber State, Vollert caught 146 passes for 1,977 yards receiving and 13 touchdowns over the course of 38 games.