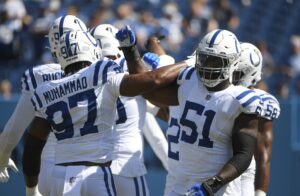 Paye, 22, was a three-year starter at Michigan and a second-team All-Big Ten selection in 2020, missing two games due to injury. The Colts drafted Paye with pick No 21 overall in the 2021 NFL Draft.

In 2021, Paye has appeared in three games for the Colts, recording eight total tackles.

We will have more news on Paye in the near future.