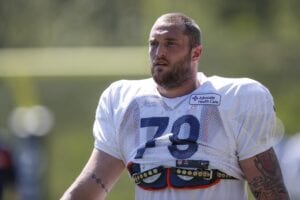 Spriggs, 28, was drafted in the second round by the Packers in 2016. He played for three seasons in Green Bay, but spent the 2019 season on injured reserve after he was waived with an injury designation coming out of preseason.

Spriggs signed on with the Bears and played the entire 2020 season with Chicago. He joined the Falcons in July of last year and later caught on with the Colts a few months ago.

In 2021, Spriggs appeared in 15 games for the Falcons and started once.