According to Ian Rapoport, the Colts have restructured WR T.Y. Hilton‘s deal to create $2.3 million in cap space. 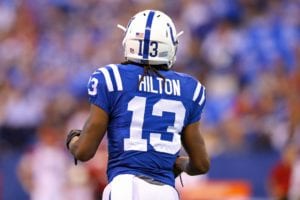 Given Hilton was on a one-year pact, Indianapolis likely added void years to the contract.

He was placed on injured reserve due to an upper back/neck injury coming out of the preseason. He’s appeared in one game in 2021 and caught four passes for 80 yards.