The Dallas Cowboys are scheduled to host four kickers for a tryout on Tuesday, according to Todd Archer. 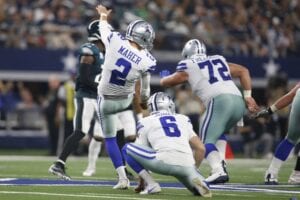 Maher, 32, originally signed on with the Jets as an undrafted free agent of Nebraska back in 2013. He lasted just a few months in New York before he was waived and later signed by the Cowboys during the preseason.

Maher later played for the Jets, Washington and Texans before joining the Cardinals late in 2020. Arizona brought him back on a futures contract but waived him just a couple months later. He was on and off of the Saints’ roster last year.

New Orleans ultimately opted to release Maher back in February.