The Dallas Cowboys have also fired DL Jim Tomsula on Friday, according to Tom Pelissero. 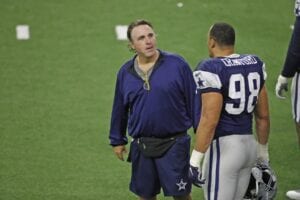 This comes shortly after the news that the Cowboys have fired defensive coordinator Mike Nolan following a disappointing year.

Tomsula, 52, began his NFL coaching career with the 49ers as their defensive line coach back in 2007. He stayed in this position for several years before he took over for Jim Harbaugh after he was fired in 2015.

Washington hired Tomsula as their DL coach in 2017 and he eventually joined the Cowboys last year.