Cowboys LB Luke Gifford has been suspended two games without pay for violating the NFL’s policy on performance-enhancing substances, per Jon Machota. 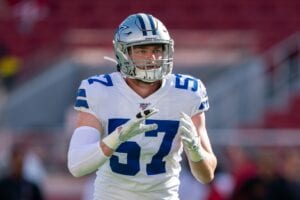 Gifford is eligible to return to the Cowboys’ active roster on Friday, Dec. 4, following the team’s Week 13 game against the Ravens.

Gifford, 25, wound up going undrafted out of Nebraska back in April of last year. He later signed a three-year, $1.755 million contract with the Cowboys.

Gifford made the 53-man roster coming out of the preseason but was later placed on injured reserve in December with a fractured arm.

In 2020, Gifford has appeared six games for the Cowboys and recorded two tackles.