The Dallas Cowboys have placed CB Jourdan Lewis and OL Matt Farniok on the injured reserve, per Todd Archer of ESPN. 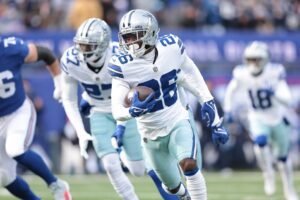 Earlier this week, the Cowboys diagnosed Lewis with a Lisfranc injury suffered late in the team’s win over the Lions. Lewis has already had surgery to correct the issue and will now rehab with an eye on returning for the 2023 season.

He had been starting at nickel corner for Dallas and will be replaced by fifth-round CB DaRon Bland.

Lewis, 27, is a former third-round pick of the Cowboys out of Michigan back in 2017. He played out the final year of his four-year rookie contract and re-signed to a three-year deal worth up to $16.5 million.

In 2022, Lewis appeared in seven games for the Cowboys and recorded 26 total tackles, one sack, one interception and one pass defense.