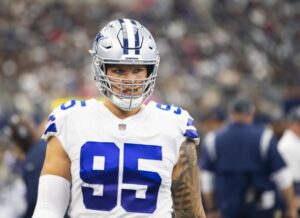 Urban, 30, is a former fourth-round pick out of Virginia by the Ravens in the 2014 NFL Draft. After finishing his four-year rookie contract, he re-signed with Baltimore to a one-year, $1 million deal back in 2018.

The Titans signed Urban to a contract in April before releasing him partway through the 2019 season. Urban caught on with the Bears for the rest of the year and re-signed on a one-year deal for 2020.

From there, the Cowboys signed Urban to a one-year contract this past March.

In 2021, Urban has appeared in six games for the Cowboys and recorded three tackles, no sacks and a pass deflection.