The @dallascowboys had the following transactions on Friday:

According to Nick Eatman, the Cowboys have released K Greg Zuerlein and waived Te Blake Jarwin with an injury designation. 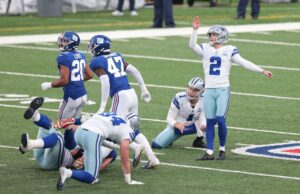 Regarding Jarwin, he was not expected to be available for the start of the 2022 season due to a hip injury that required surgery in late February.

Calvin Watkins added the surgery has only been done on hockey and baseball players, not football players.

Zuerlein, 33, is a former six-round pick of the Rams back in 2012. He played eight seasons for the Rams and just finished out the final year of his three-year, $6.75 million contract that included $2.375 million guaranteed when the Rams allowed him to leave in free agency.

Zuerlein signed a three-year, $7.5 million deal with the Cowboys and was entering the final year of his deal.

Jarwin, 27, signed on with the Cowboys as an undrafted free agent out of Oklahoma State back in 2017. He joined their practice squad coming out of the preseason his rookie year and was promoted to their active roster shortly after.

In 2021, Jarwin appeared in eight games for the Cowboys and caught 11 passes for 96 yards receiving and two touchdowns.