The NFL has already announced that the Cowboys are appearing on “Hard Knocks” this summer.

We’re coming for you, @DallasCowboys! 🤠#HardKnocks kicks off August 10th on @HBOMax pic.twitter.com/1NFJ9DhCSh

“We are thrilled that Hard Knocks will be returning this summer and excited for our return to the NFC East and the Dallas Cowboys franchise,” says Jonathan Crystal, Vice President, HBO Sports. “We are beyond grateful to the Cowboys for opening up their doors and allowing HBO and NFL Films to spend the summer with one of the sport’s world’s truly iconic franchises as they prepare for the upcoming season.”

“The Cowboys are one of the most storied franchises in NFL history and a team that elicits strong reactions from fans around the world,” said Ken Rodgers, Vice President, Senior Coordinating Producer at NFL Films. “Tens of millions of fans love them, but just as many people love to hate them.  Either way, when the Cowboys show up people watch, which makes them perfect for Hard Knocks. This year, their high-profile status as “America’s Team” is paired with uniquely interesting storylines. We can’t thank Mr. Jones and Coach McCarthy enough for letting us tell the story behind what we hope is the beginning of an exciting year in Dallas.”

Adam Schefter reports that the Dallas Cowboys are expected to be selected to appear on this season’s five-episode series of HBO’s “Hard Knocks.” 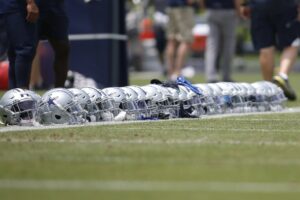 According to Schefter, an official announcement regarding the Cowboys returning to “Hard Knocks” is likely to come as early as today.

The first episode of “Hard Knocks” series debuts on August 10. There will be five episodes in total.

This will be the third time the Cowboys have been featured on ‘Hard Knocks.’ Dallas first appeared on the show in 2002 and then again in 2008.

It’s worth mentioning that the Cowboys are splitting time between Oxnard and Frisco during their training camp this year.

The Cowboys were among the teams that could have been forced to appear on ‘Hard Knocks” along with the Broncos, Giants, Panthers and Cardinals.