According to Todd Archer, the Cowboys brought in seven players for workouts on Wednesday including QB Reid Sinnett. 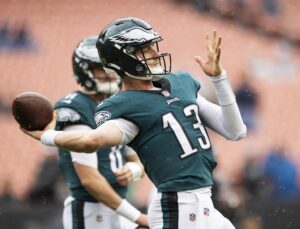 Sinnett, 25, originally signed on with the Buccaneers as an undrafted free agent out of San Deigo back in May. He was among Tampa Bay’s final roster cuts coming out of training camp and re-signed to the practice squad, but was cut loose a day later.

The Dolphins signed Sinnett to their practice squad after a week and was eventually promoted back in November of 2020. Miami re-signed him to a futures deal for the 2021 season only to release him coming out of the preseason. He’s bounced on and off of their roster before being claimed by the Eagles. He was among Philadelphia’s final roster cuts coming out of the preseason.