Adam Schefter reports that the Houston Texans have a one-year agreement in place with Derrick Ward who was cut by the Tampa Bay Buccaneers less than a week ago. Earlier today reports surfaced that Ward planned on meeting with the Texans and the Seahawks but Seattle wasn’t even given the chance to obtain Ward’s services.

Houston’s backfield was hit hard with the loss of rookie running back Ben Tate during the teams mini-camp. Ward will be brought in to be the tough-running back that they were hoping that Tate would become this season. Ward’s best season came as the counterpart to Brandon Jacobs bruising running style so they may be asking a little much from him given that he struggled to produce in Tampa Bay last season. 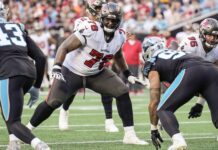