According to Aaron Wilson, the Dolphins activated LB Sam Eguavoen from their COVID-19 list and waived CB Terrell Bonds in a corresponding roster move. 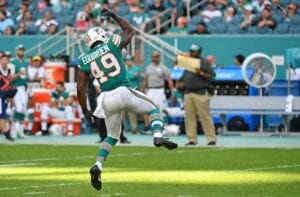 Eguavoen, 28, wound up going undrafted out of Texas Tech back in 2015. He signed on with the Saskatchewan Roughriders of the CFL for the 2016 season and spent three years in Canada.

The Dolphins signed Eguavoen to a futures contract for the 2019 season. He’s been on the roster ever since.

In 2020, Eguavoen appeared in all 16 games for the Dolphins and recorded seven total tackles, no sacks and a pass defense.

NFL Changes Wildcard Weekend Format To Include One Monday Game