The Miami Dolphins have designated OT Liam Eichenberg to return from injured reserve, per Aaron Wilson. 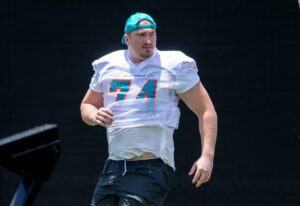 This opens up a three-week window for him to practice with the team before he has to be added to the active roster.

Eichenberg, 24, was a three-year starter at Notre Dame and was named first-team All-ACC in 2020. The Dolphins drafted Eichenberg with pick No. 42 overall in the second round of the 2021 NFL Draft.

In 2021, Eichenberg has appeared in eight games for the Dolphins and made eight starts at left guard. Pro Football Focus has him rated as the No. 71 guard out of 81 qualifying players.