Dolphins RB Myles Gaskin returned to practice on Wednesday and will be designated to return from injured reserve, per Cameron Wolfe. 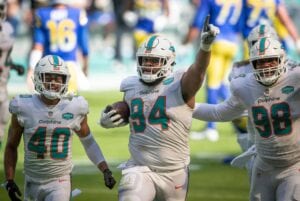 Miami is also planning to activate DT Christian Wilkins from the COVID-19 list.

This opens up a three-week window for Gaskin to practice with the team before he has to be added to the active roster.

Gaskin, 23, is a former seventh-round pick of the Dolphins back in 2019. He signed a four-year, $2.6 million contract with the Dolphins.

In 2020, Gaskin has appeared in seven games for the Dolphins and rushed for 387 yards on 110 carries (3.9 YPC) to go along with 30 receptions for 198 yards receiving and two total touchdowns.

The Dolphins will have a fifth-year option to pick up on Wilkins in 2023.

In 2020, Wilkins has appeared in eight games for the Dolphins and recorded 28 tackles, one sack, an interception, a fumble recovery and five passes defended.