Josh Tolentino of The Athletic reports that the Dolphins have released LB James Crawford on Sunday. 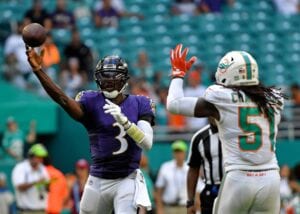 Crawford, 25, wound up going undrafted out of Illinois back in 2018. He landed with the Packers in August during training camp and managed to make the 53-man roster.

Green Bay waived Crawford last year and he was later claimed off waivers by the Dolphins. Unfortunately, Miami placed him on injured reserve with a knee injury a few weeks into the regular season.

For his career, Crawford has appeared in 19 games for the Packers and Dolphins and recorded nine tackles, no sacks or interceptions and a fumble recovery.

During his college career at Illinois, Crawford recorded 80 tackles, 11 tackles for a loss, four sacks, four forced fumbles, three recoveries and six pass defenses over the course of three seasons and 27 games. He served as a team captain as a senior and was named All-Big Ten honorable mention by the coaches.