According to Tom Pelissero, the Dolphins have requested to interview Rams RBs coach Thomas Brown for their head coaching vacancy. 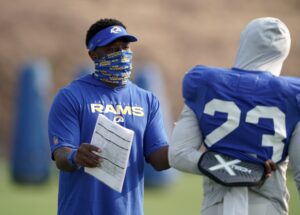 Brown, 35, is a former NFL running back and played for the Falcons and Browns during his career. His coaching career began in 2011 as Georgia’s strength and conditioning coach and became the running backs coach for Chattanooga, Marshall, Wisconsin, and Georgia before becoming Miami’s offensive coordinator from 2016-2018.

After one season as South Carolina’s running backs coach and was hired by the Rams in 2020.