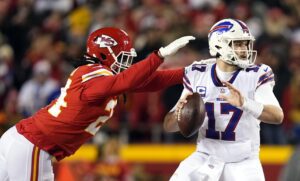 Ingram visited with the Dolphins last month after having a UFA tender placed on him by the Chiefs.

However, the Steelers traded Ingram to the Chiefs ahead of the deadline for a sixth-round pick.

In 2021, Ingram appeared in six games for the Steelers and nine games for the Chiefs. He recorded 25 total tackles, four tackles for loss, two sacks, one forced fumble, and one pass defense.