According to Adam Schefter, the Dolphins have taken trade calls on CB Xavien Howard, but are not planning on trading him barring a “Laremy Tunsil type” offer. 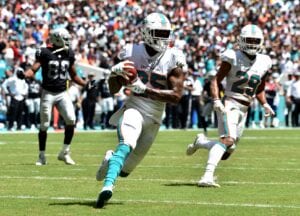 Miami famously traded Tunsil to the Texans last year for a deal that included two first-round picks and a second-round pick. Tunsil actually told the Dolphins after seeing the trade he would have traded him for that, too.

This marks the second time Howard’s name has surfaced in trade talks over the past week despite the Dolphins’ vociferous denial.

Miami made Howard the NFL’s highest-paid corner at the time in an extension last summer, so it would be unusual to see him traded. However, it appears unlikely to happen if this is the return the Dolphins are seeking.

In 2020, Howard has appeared in six games for the Dolphins and recorded 11 tackles, four interceptions and six pass defenses. Pro Football Focus has him rated as the No. 9 corner out of 118 qualifying players.