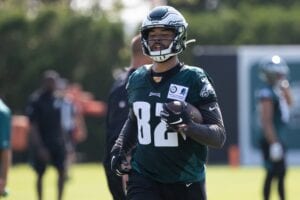 The Eagles re-signed Rodgers to a two-year, $1.9 million in 2019 but later released him with an injury settlement in September. From there, Rodgers joined Washington but was cut loose and returned to Philadelphia on a one-year deal.

Philadelphia re-signed Rodgers last year and he’s been with the team ever since.

In 2021, Rodgers appeared in three games for the Panthers and caught two passes for 11 yards and no touchdowns.