According to Ian Rapoport, the Eagles have been happy with the production from QB Jalen Hurts in recent weeks and could stick with him as the starter in 2022. 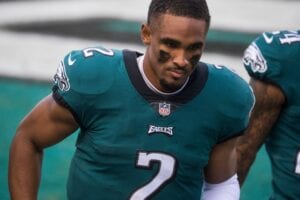 Rapoport explains this year was essentially an audition for Hurts, and if the Eagles felt they needed an upgrade at quarterback, they have three first-round picks this coming offseason to work with.

However, Hurts’ play means the Eagles could potentially dedicate those resources to other parts of the team and build around Hurts instead of replacing him.

If Hurts keeps up his strong level of play, including in both the run and pass game, and the Eagles keep winning, he could get at least another year as the starter.

In 2021, Hurts has appeared in 11 games for the Eagles and completed 61.6 percent of his pass attempts for 2,306 yards, 13 touchdowns and five interceptions. He’s also rushed 114 times for 618 yards and eight touchdowns.

We’ll have more on the Eagles’ quarterback situation as the news is available.