Per Jeff McLane, the Eagles announced DE Josh Sweat was admitted to the hospital on Tuesday this past week and had an emergency procedure for what the team is calling a life-threatening situation. 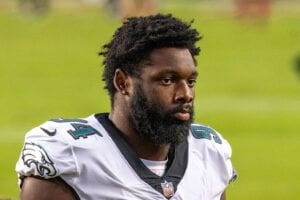 The team added Sweat will not play this week against the Buccaneers, though he was not ruled out until later in the week.

Eagles HC Nick Sirianni said this week that Sweat was dealing with an abdominal issue, but the team says he did not have an appendectomy, per McLane.

Sweat would have been an unrestricted free agent in 2022 before signing a three-year, $42 million extension.

In 2021, Sweat has appeared in 16 games for the Eagles and recorded 45 total tackles, 7.5 sacks, one forced fumble and four pass deflections.