According to Aaron Wilson, the Eagles promoted OT Le’Raven Clark from the practice squad to the active roster. 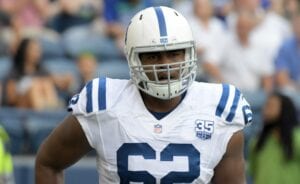 The Eagles signed Clark to a contract this past May, but was released coming out of the preseason and later added to their practice squad.

He’s appeared in two games for the Eagles so far this season.

In 2020, Clark appeared in 12 games for the Colts, making three starts for them at left tackle.