Mike Garafolo of NFL Media reports that the Eagles are signing former Vikings LB Eric Wilson to a one-year contract worth up to $3.25 million. 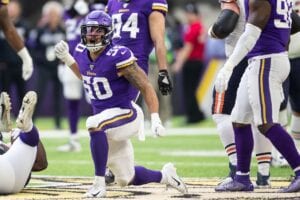 Wilson, 25, was signed by the Vikings as an undrafted free agent out of Cincinnati in 2017. He played out the final year of his three-year, $1.66 million contract after making the final roster each of the past three seasons.

The Vikings brought Wilson back last year on a second-round restricted tender worth $3.27 million for the 2020 season.

In 2020, Wilson appeared in all 16 games for the Vikings and recorded 121 tackles, three sacks, three interceptions, a forced fumble, two recoveries and eight passes defended.