Jimmy Kempski clarifies RB JaQuan Hardy is one of several players working out for the Eagles on Monday and has not actually signed a contract yet.

The Philadelphia Eagles are signing RB JaQuan Hardy, according to Eliot Shorr-Parks. 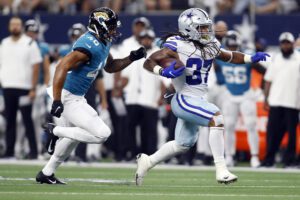 The Eagles were thin at running back and the addition of Hardy should provide much needed depth and competition as the team prepares to kick off training camp.

Hardy was ultimately released before the start of the season and ended up spending time on and off the Cowboys’ practice squad and active roster throughout the year before signing a future’s contract with the team back in January. Dallas ended up releasing Hardy a few weeks ago.