Jimmy Kempski of PhillyVoice.com reports that Eagles TE Tyree Jackson and OL Brett Toth will both begin training camp on the physically unable to perform list. 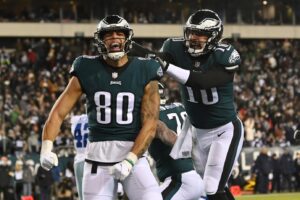 Jackson and Toth both suffered a torn ACL during the Week 18 season finale against the Dallas Cowboys and are still going through the rehabilitation process.

Jackson, 24, wound up going undrafted out of Buffalo back in 2019, converting from quarterback to tight end. He lasted just a few months in Buffalo before he was waived at the start of the regular season.

The Eagles signed him to a futures contract back in January.

In 2021, Jackson appeared in nine games for the Eagles and started three of them. He caught three passes for 22 yards and one touchdown.

We will have more news on Jackson and Toth as it becomes available.