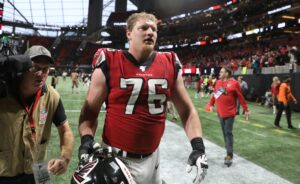 The Falcons will have a fifth-year option to pick up on McGary next year.

In 2021, McGary has appeared in five games for the Falcons, making five starts for them.

Andrews, 30, wound up signing on with the Eagles as an undrafted free agent out of Oregon State back in 2014. He spent his rookie season on the Eagles’ practice squad before returning to the team on a futures contract.

The Eagles elected to cut Andrews loose at the start of the 2017 season and he was on and off of their roster before joining the Vikings. From there, Andrews returned to the Eagles and had a brief stint with the Colts before the Jets signed him last year.

The Falcons signed Andrew to a contract this past March.

In 2020, Andrews appeared in 15 games for the Jets, making four starts for them.