We have signed RB D'Onta Foreman. We have activated Willie Wright and Kaleb McGary to the active roster. In addition, we have released Tyler Hall and have waived/injured Deadrin Senat. https://t.co/GwKIs44ZJs

Atlanta brought Forman in for a visit last week.

McGary, 26, was the No. 31 overall pick by the Falcons out of Washington in 2019. Atlanta elected to trade up with the Rams to select him and exchanged their No. 45 and No. 79 overall picks.

In two years with Atlanta, McGary has played in 30 of 32 possible games, all at right tackle. 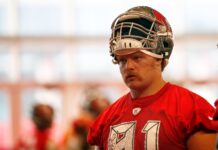