According to Ian Rapoport, former San Francisco and Washington TE Jordan Reed is retiring from the NFL. 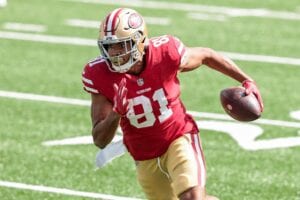 When he was on the field, Reed was one of the most dangerous pass-catching tight ends in the league.

Unfortunately for him, that was seldom as Reed battled numerous injuries throughout his career.

Rapoport said his return to the field to play with the 49ers last season helped give Reed what he needed to walk away from the game with no regrets.

Reed, 30, was taken in the third round of the 2013 NFL draft by Washington out of Florida. He was in the final year of his rookie contract when he signed a six-year, $48 million deal that included $22 million guaranteed with Washington.

Reed was set to make base salaries of $8.25 million and $8.75 million over the next two years of the agreement when the team released him in 2020. He then signed a one-year deal with the 49ers prior to the start of the season.

For his career, Reed appeared in 75 games for Washington and San Francisco, recording 355 receptions for 3,602 yards and 28 touchdowns. He was named to the Pro Bowl in 2016.