According to Field Yates of ESPN, free agent WR/TE Kelvin Benjamin has been suspended for the first two weeks of the season. 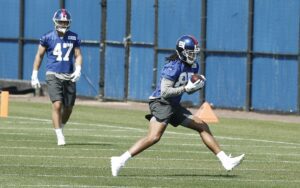 Benjamin, 30, is a former first-round pick of the Panthers back in 2014. He played out the final year of his four-year, $7.66 million contract that includes $6.19 million guaranteed when the Panthers picked up his fifth-year option in 2018.

Carolina elected to trade Benjamin to the Bills for third- and seventh-round picks in 2017. However, Buffalo later waived and he eventually caught on with the Chiefs.

The Giants signed Benjamin to play tight end this summer, but he was later released to due an issue with his playing weight.

In 2018, Benjamin appeared in 15 games for the Bills and Chiefs and caught 25 passes for 380 yards receiving and one touchdown.