Pat Leonard reports that the Giants are activating WR John Ross from injured reserve on Saturday for Sunday’s game against the Saints. 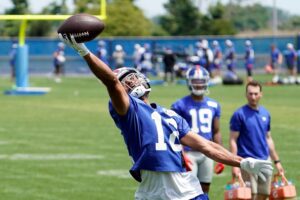 The Giants are without receivers Sterling Shepard (hamstring) and Darius Slayton (hamstring) this week, so they needed some help at the position.

Ross, 25, is a former first-round pick of the Bengals back in 2017. He just finished the final year of his four-year rookie contract worth $17.11 million which included a signing bonus of $10.58 million.

Ross was in the final year of his rookie contract in 2020 after Cincinnati declined his fifth-year option. The Giants signed him to a one-year, $2.5 million deal this past March.

In 2020, Ross appeared in three games for the Bengals and caught two receptions for 17 yards.