Giants HC Joe Judge announced that they are placing WR John Ross and DL Oshane Ximines on the COVID-19 list on Wednesday, according to Pat Leonard. 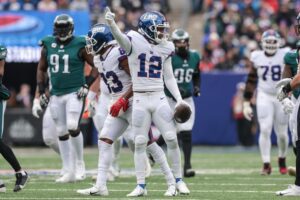 Judge added that New York may have some close-contact designations as well.

Ralph Vacchiano adds that Giants LB Cam Brown and CB Aaron Robinson both tested positive for COVID-19 and S Xavier McKinney is considered to be a high-risk close contact. They have been placed on the COVID-19 list as a result.

Giants WR Kadarius Toney was already moved to the COVID-19 list earlier this week, so there appears to be an outbreak occurring in New York’s locker room.

Ross, 26, is a former first-round pick of the Bengals back in 2017. He just finished the final year of his four-year rookie contract worth $17.11 million which included a signing bonus of $10.58 million.

Ross was in the final year of his rookie contract in 2020 after Cincinnati declined his fifth-year option. The Giants signed him to a one-year, $2.5 million deal this past March.