New York Giants RB Brandon Jacobs has been very outspoken during the offseason which has cast him as a distraction for the team. Giants G.M. Jerry Reese mentioned that he has chosen to ignore Jacobs public comments.

“I guess you have to consider the source when Brandon starts talking,” Reese said during an interview with ESPN Radio Monday, via Ohm Youngmisuk of ESPNNewYork.com. “You can’t read a lot into what Brandon is saying sometimes. We do expect Brandon to be part of the football team this fall. He is under contract. Brandon does talk a lot and like I said, sometimes you got to tune some of that stuff out that he is talking about.”

The team has told free agent to be Ahmad Bradshaw that he remains their top priority this offseason so keeping Jacobs would force them to commit $4.6 million to him for the 2011 season. Reese also mentioned that getting Jacobs more carries will be a focus for the team come next season.

Jacobs has been largely disappointing in recent years especially on short-yardage situations. You would think that a running back with Jacobs size and power would be a force in those situations but opposing defensives are smart enough to load the box and target his lower body. He’ll need a productive season to ensure that a decent contract following the season. 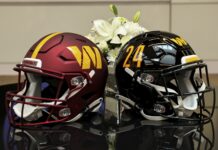