Ryan Dunleavy of the New York Post reports that the Giants are re-signing DB Nate Ebner to a contract on Tuesday and waiving WR C.J. Board. 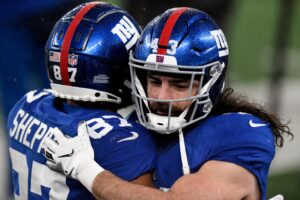 Dunleavy adds that the Giants plan to re-sign Board to their practice squad if he clears waivers.

Ebner had been testing the open market as an unrestricted free agent since March.

Ebner, 32, is a former sixth-round pick of the Patriots back in 2012. He finished a two-year, $5 million contract with New England before signing on with the Giants last year.

In 2020, Ebner appeared in all 16 games for the Giants and recorded six tackles, no interceptions and a pass deflection.

New York brought him back on a one-year contract this last March.

In 2020, Board appeared in 14 games for the Giants and caught 11 passes for 101 yards receiving and no touchdowns. He also rushed for three yards on one carry. As a returner, Board totaled 54 kick return yards and six punt return yards.