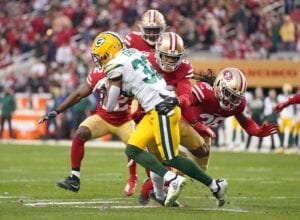 Ervin previously visited with the Bills but left Buffalo without a deal.

Ervin, 27, is a former fourth-round pick of the Texans back in 2016. He spent over two years in Houston before he was waived later signed to the Ravens’ practice squad.

Baltimore brought Ervin back on a futures contract only to waive him coming out of the preseason. The Jaguars later claimed him off waivers before cutting him loose a few months later.

Ervin was once again claimed off waivers, this time by the Packers. He returned to Green Bay last year on a one-year deal.

In 2020, Ervin appeared in eight games for the Packers and rushed 67 yards on 13 carries (5.2 YPC) to go along with 11 receptions for 84 yards receiving and no touchdowns. He also totaled 196 kick return yards and 20 punt return yards.