According to Jordan Raanan of the Newark Star-Ledger, the Giants worked out WR Aldrick Robinson and seven other players on Tuesday.

Robinson, 27, was sixth round pick by the Redskins in 2011. He spent two years with the Redskins before being signed by the Ravens in 2014. Unfortunately, he was among Baltimore’s final roster cuts during the preseason.

Robinson has since tried out for the Saints and Jets, but was never offered a contract from either team.

In 2014, Robinson appeared in five games and caught one pass for six yards and played a total of 27 snaps, according to Pro Football Focus. 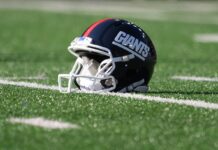