According to Aaron Wilson, the Jaguars cut K Elliott Fry from the injured reserve with an injury settlement. 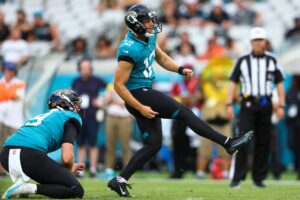 Fry reverted to the team’s injured reserve earlier this week after being waived with an injury designation.

The Bears signed him to a contract before cutting him loose during the preseason. From there, Fry had brief stints with the Ravens, Panthers, Buccaneers, Falcons, Chiefs, Packers and Bengals. He was waived by the Jaguars earlier this week.

In 2021, Fry appeared in two games for the Chiefs and Bengals and converted 4 of 5 field goal attempts and 4 of 5 extra point tries.