According to Mark Long, Jaguars OL Brandon Linder is expected to miss 4-5 weeks with a high ankle and MCL sprain. 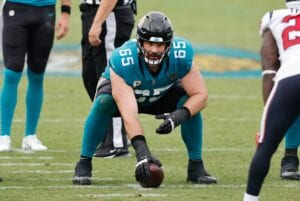 The Jaguars are likely to place Linder on injured reserve, which would keep him out a minimum of three games.

Linder, 29, is a former third-round pick of the Jaguars back in 2014. He was entering the final year of his rookie contract when he agreed to a six-year, $52.4 million contract that included $24 million guaranteed with the Jaguars in 2017.

Linder stands to make a base salary of $8 million for the 2021 season.

In 2021, Linder has appeared in five games for the Jaguars, making five starts. Pro Football Focus has given Linder an overall grade of 57.9 this season.