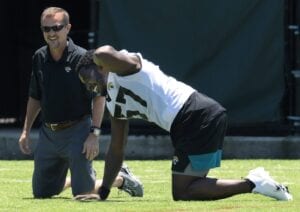 Moses suffered a knee injury during the 2020 season at Alabama.

Moses, 23, is a two-year starter at Alabama and earned second-team All-SEC honors in 2018 and first-team honors last season.

The Jaguars signed Moses to a contract as a priority undrafted free agent this past May.